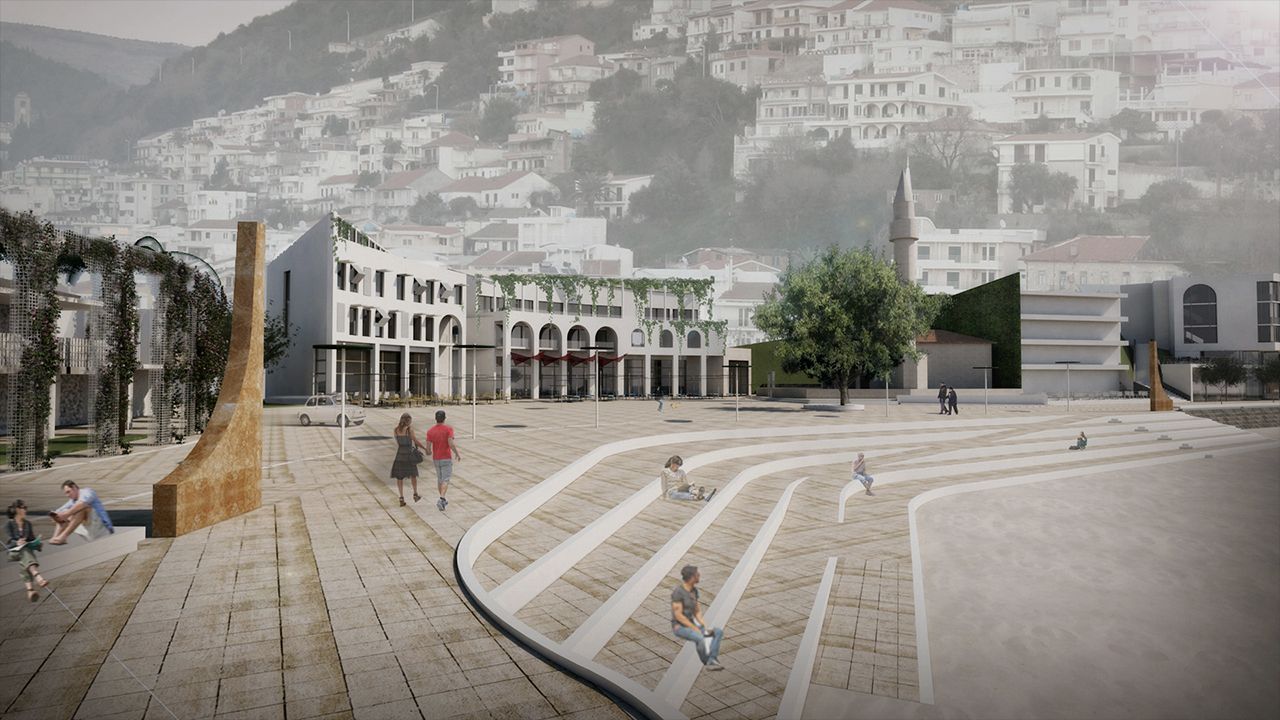 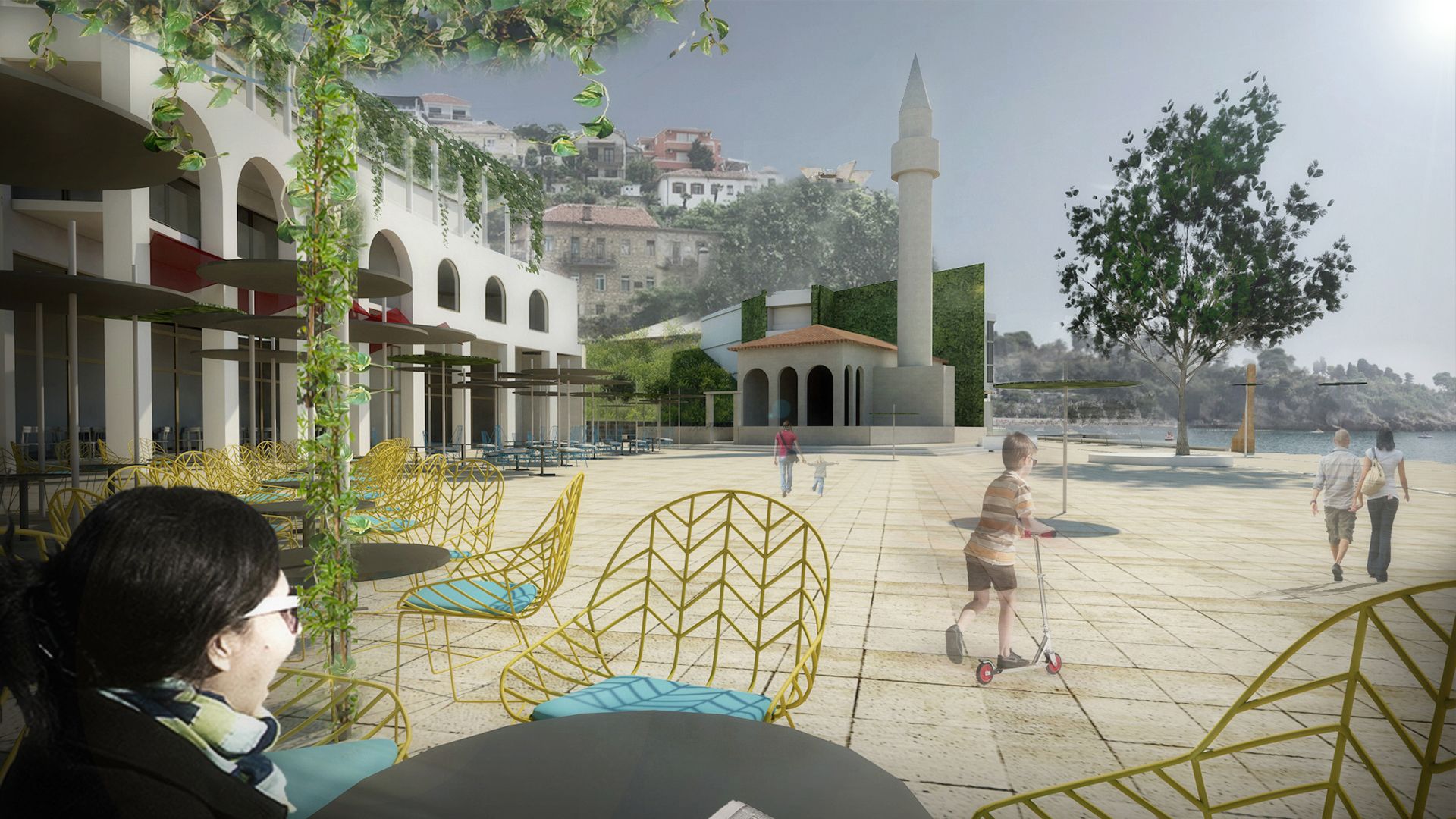 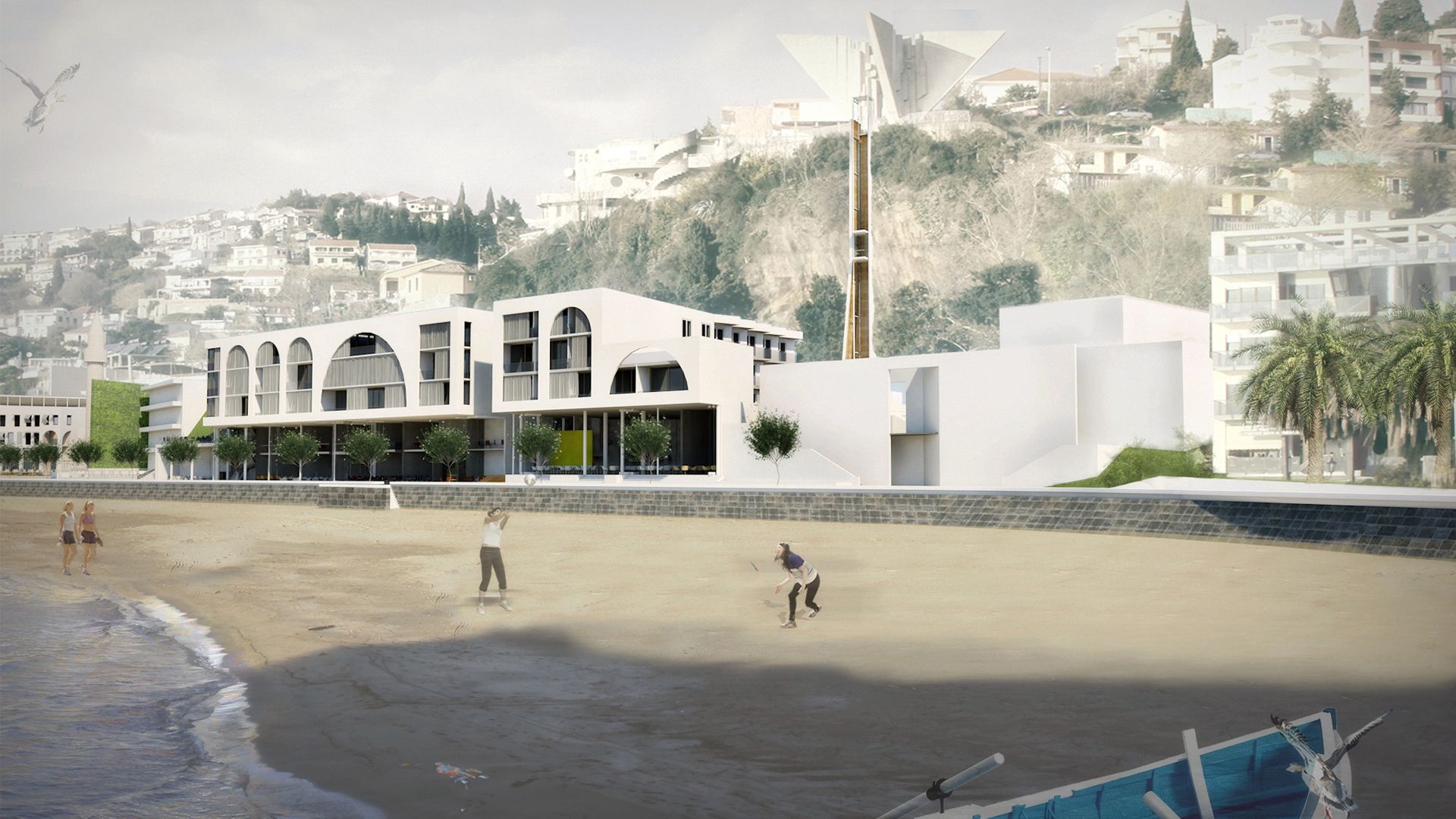 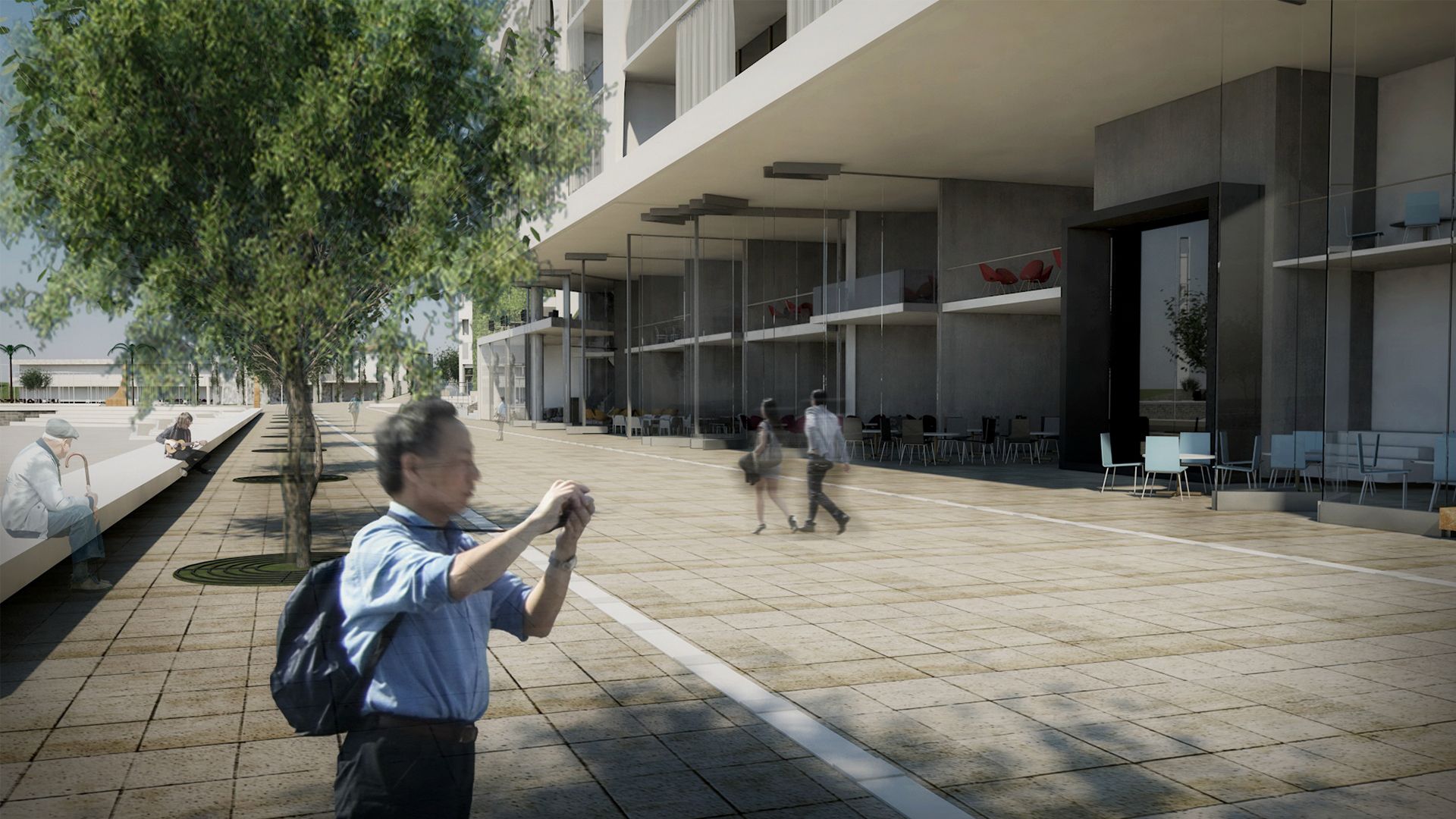 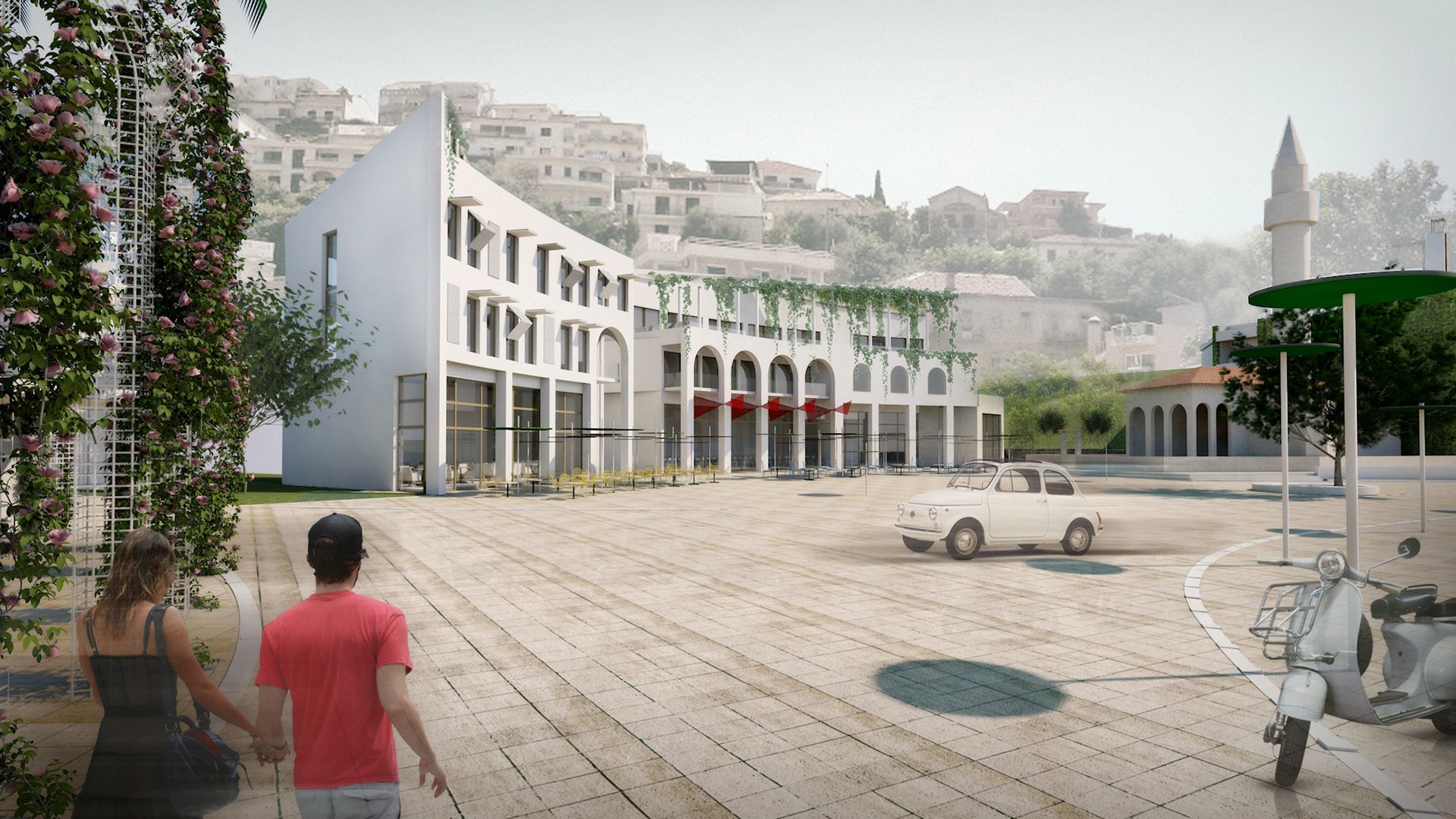 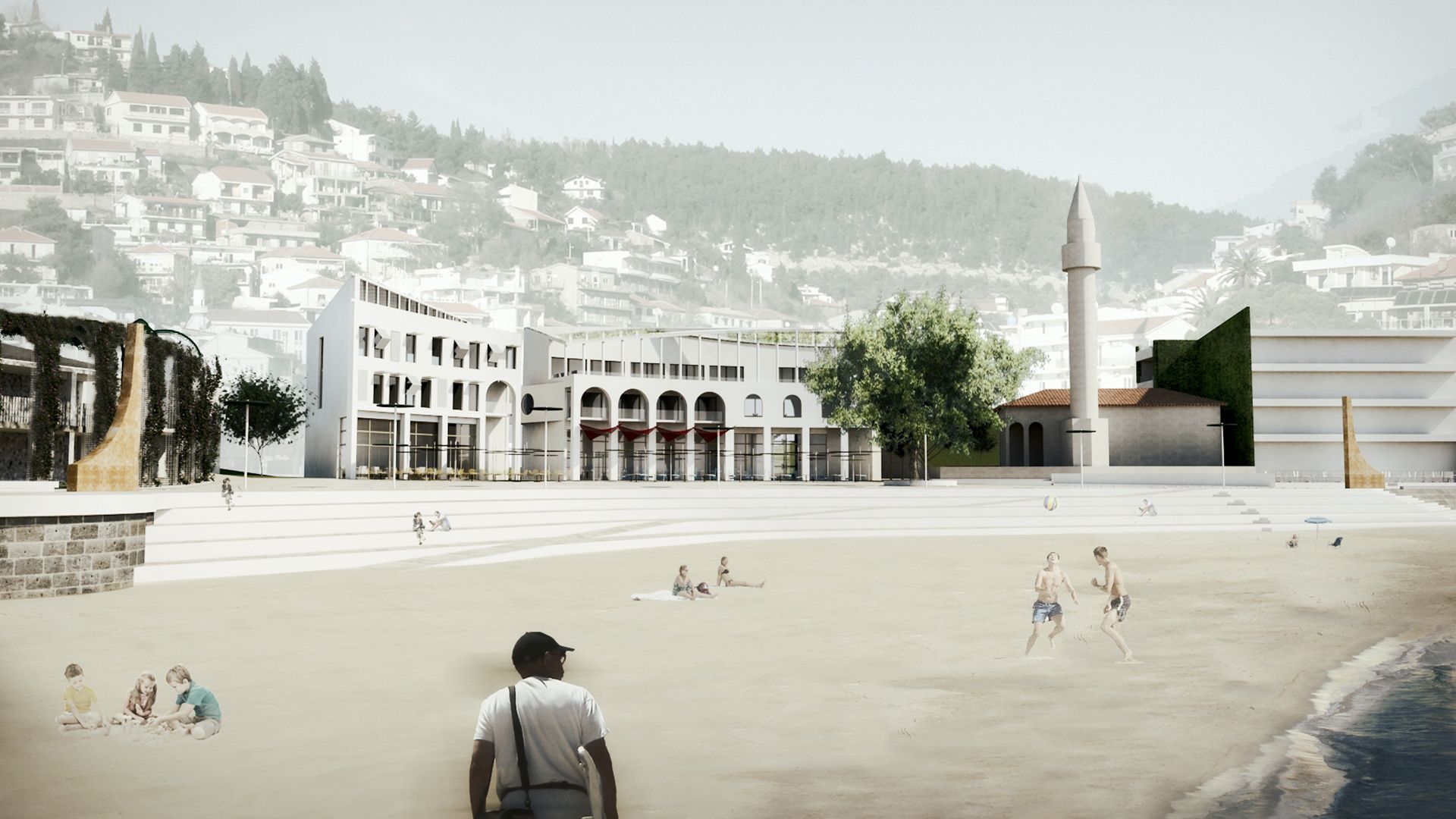 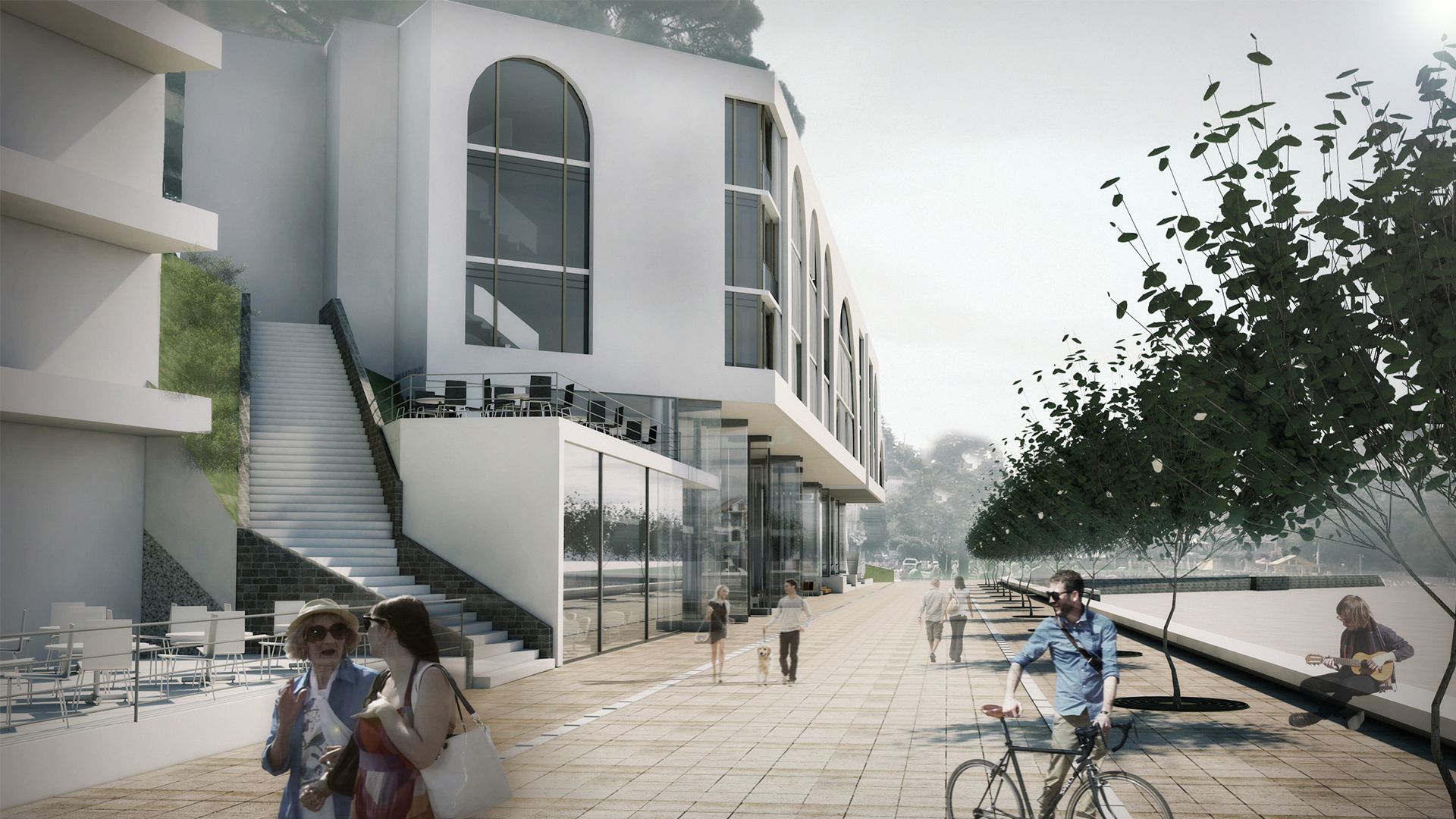 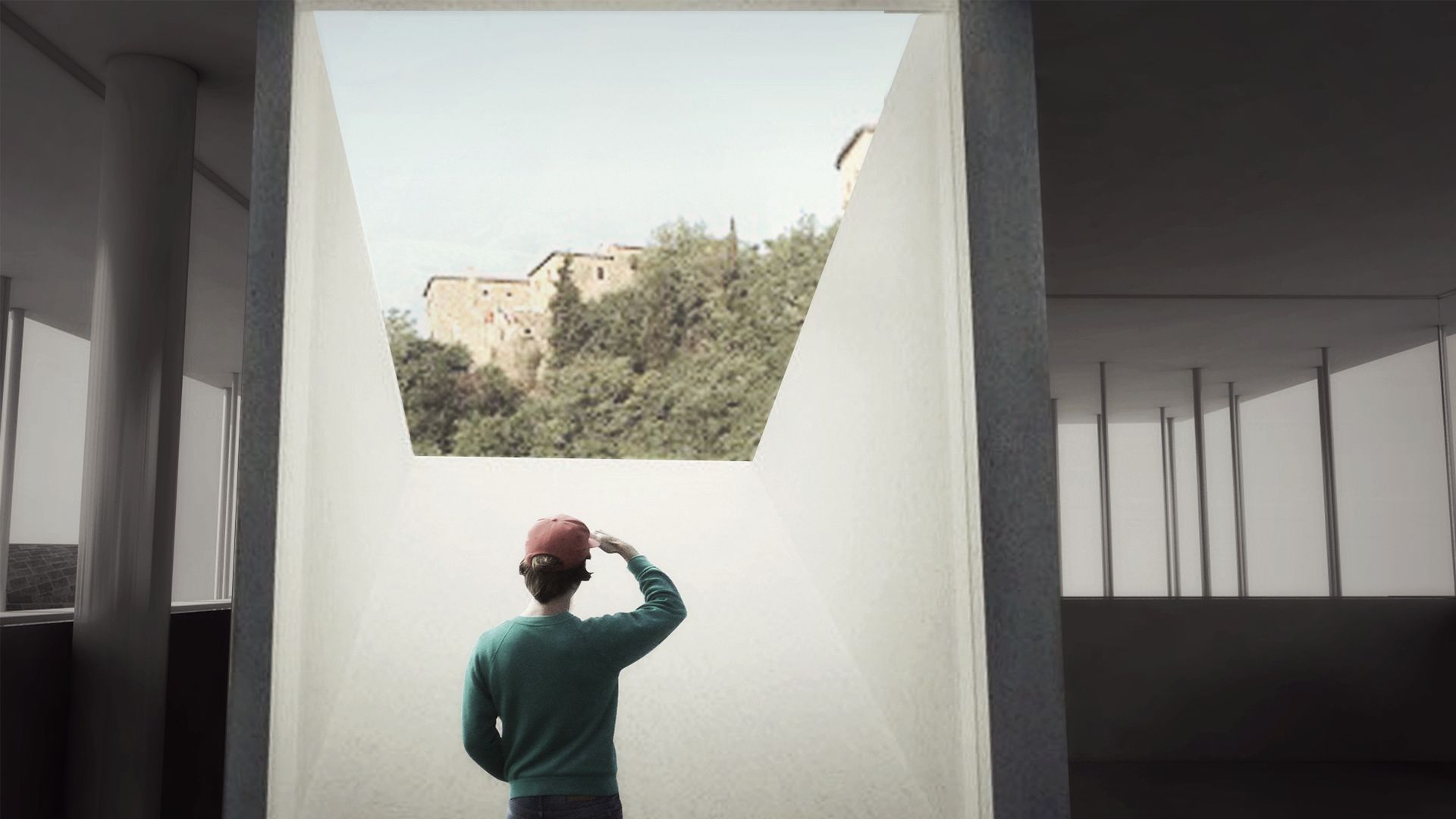 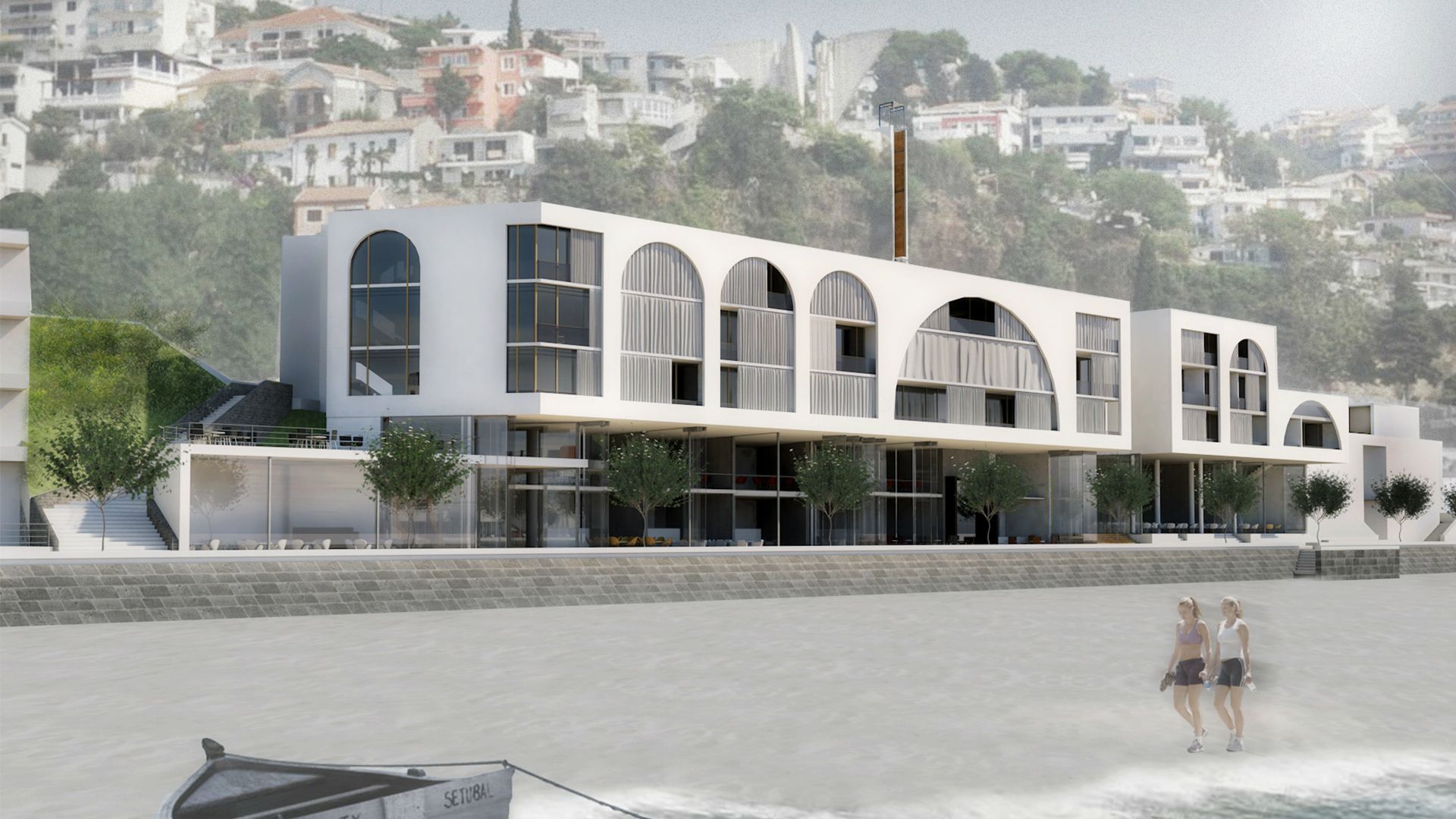 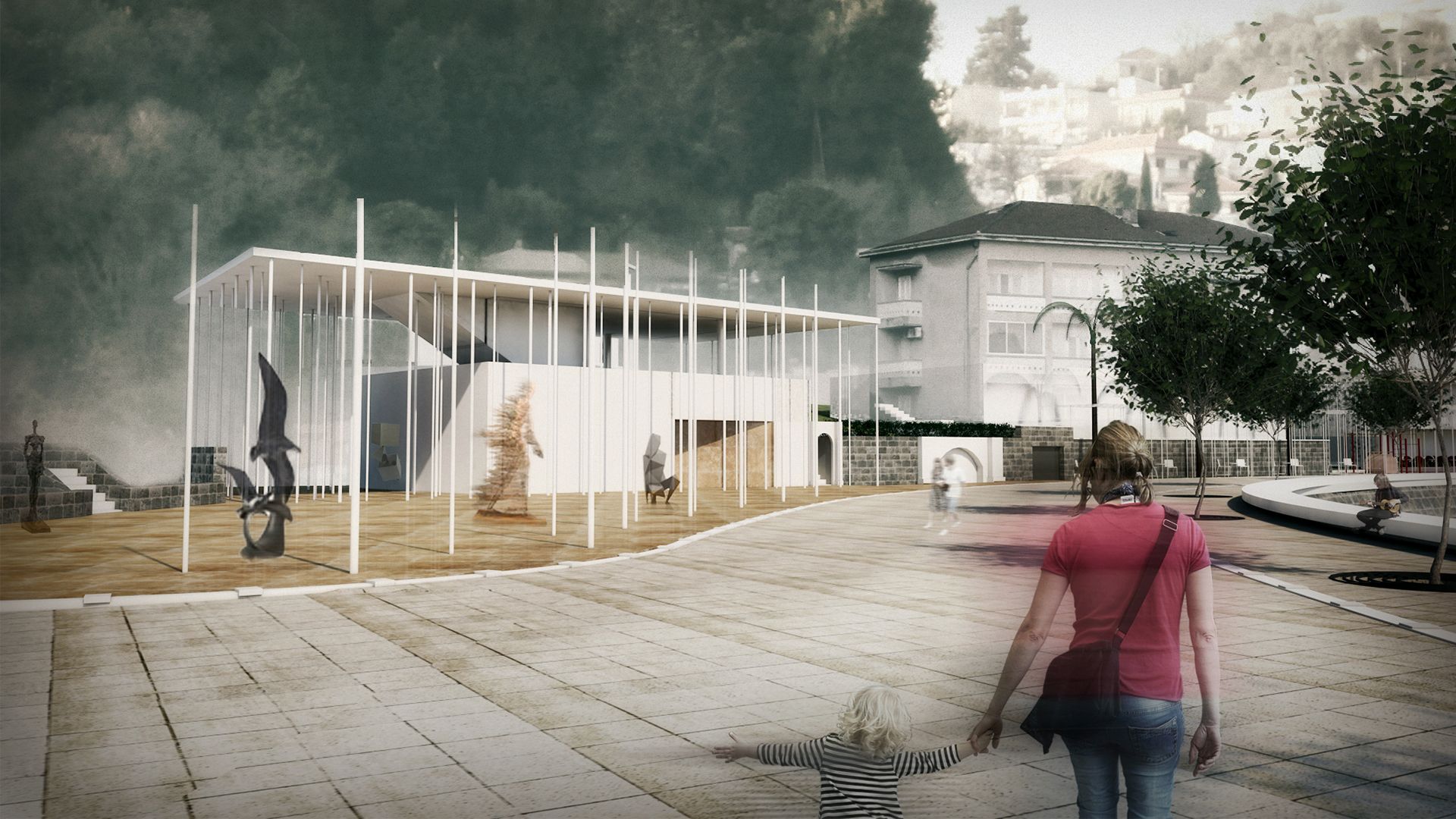 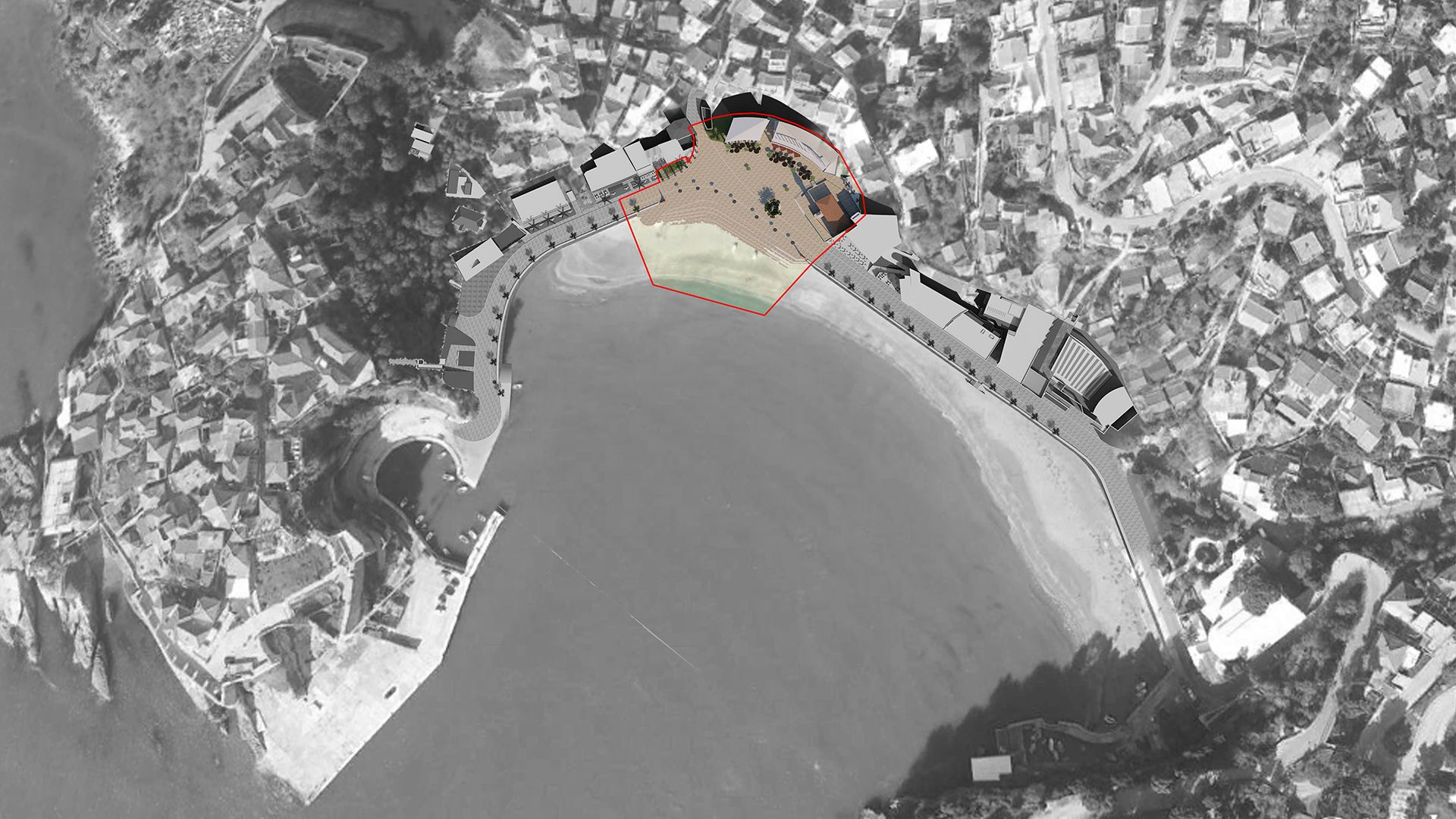 The square becomes a static place. Visual unity is achieved by the symbiosis of several elements, starting from the identical treatment of the paved square, the road and the stairs. New objects on the square are formatted so that they are read as one (elements of an object co-operate with elements of the other rather than elements on the same object).

The program assignment was requested to design the P + 3 floor plans on the given urban plots with their facade on the seafront promenade.

As a contrasting form on this backdrop, a compact structure is applied, with a uniform façade and color treatment.

With such treatment a set of different objects is read as a form that in a given space becomes more dominant than the environment.

Particular attention is paid to the treatment of a high ground which was drawn with a glass facade to the promenade, so that a wider promenade was provided and the guests of the premises had free access to the open sea.

This area includes a promenade leading from the square to the walls of the old town, which continues by a panoramic lift to the old town of Ulcinj.

On this path, a visitor must be provided with a visual drama and experience, in contrast to the peaceful panoramic view of the sea ​​horizon.

Relying on the tradition of greening the canopy element, it has been translated in a modern way, in the form of vertical poles, rods that “dance” greenery along the entire zone. The culmination of the experience takes place around the city gallery, whose position on the promenade is justified by the need to activate this zone, and parcels have also played a part in it.

There is a possibility that the art setting overflows into a part of the extérieur, by forming a small plate in front of the building.

The quality of the spatial concept of the gallery is in solving the roof, where a “frame in the sky” is given, framing the image of the old city and spoiling it in a constant setting of the gallery.